Prime Ministers Pham Minh Chinh and Kishida Fumio in a joint photo ahead of their talks in Hanoi on May 1 (Photo: VNA)

Hanoi (VNA) – Prime Minister Pham Minh Chinh and his Japanese counterpart
Kishida Fumio discussed Vietnam-Japan bilateral relations and international and regional issues of common concern in depth during their talks in Hanoi on May 1.

The two heads of government expressed their joy at the great progress of the
Vietnam-Japan relationship and reached an overall agreement on the major orientations as well as on the measures for deepening cooperation in all fields, thus opening a new stage of development in the extensive strategic partnershipbetween the two countries.

They reached consensus on the need to continue to build political trust by maintaining high-level visits and contacts and the effectiveness of cooperation and dialogue mechanisms.

The Japanese prime minister reiterated that Japan cherishes its relationship with Vietnam and values ​​Vietnam’s growing role and position in the region and the world. He also affirmed that Japan will continue to work with Vietnam and support it in socio-economic development, including key infrastructure, hosting Vietnamese interns and students, and helping the Vietnamese community in Japan.

The two leaders welcomed the remarkable progress in implementing the outcomes of Prime Minister Chinh’s official visit to Japan last November, with the completion of an updated document on the progress of cooperation in eight aspects, to namely healthcare (including COVID-19 prevention and control), investment-trade, ODA-infrastructure, people-to-people exchanges, environment-climate change, judicial affairs, defense-security, and culture-education. According to the document, most of the agreements and projects reached during Prime Minister Chinh’s visit to Japan are progressing well, such as the observation satellite, the No. 1 subway line in Ho Chi Minh City, the improvement of Vietnam-Laos connectivity, initiatives on digital transformation, technology supply chain renovation and promotion, support for COVID-19 prevention and control, defense-security, copyright infringement settlement and resumption of commercial flights.

They agreed to promote collaboration in post-pandemic economic recovery, especially in the areas of trade, investment, agriculture, energy and environment. 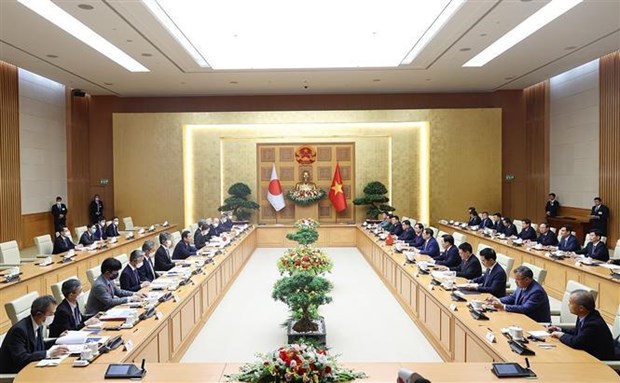 The talks between Prime Ministers Pham Minh Chinh and Kishida Fumio in Hanoi on May 1 (Photo: VNA)

The two countries will work to quickly achieve and effectively implement a new generation ODA loan program with flexible and preferential terms as well as simplified procedures for the construction of strategic infrastructure, transport infrastructure, digital transformation, response to climate change, health care.

They will speed up procedures so that Japan can declare the opening of its Vietnamese longan market in September this year while continuing to facilitate the export of Vietnamese pomelo, avocado and rambutan to Japan.

The two sides will continue their cooperation in the fields of security and defence, the UN peacekeeping operation and the settlement of the consequences of the war in Vietnam.

The two prime ministers also pledged to promote cultural and people-to-people exchanges and tourism, and to coordinate the organization of activities to mark the 50th anniversary of diplomatic relations between the two countries in 22023.

Exchanging views on regional and international issues, they agreed to coordinate closely in international and regional forums such as ASEAN, Mekong and the UN, and to respond to global challenges such as climate change and epidemics, as well as in the implementation of the Comprehensive and Progressive Agreement for Trans-Pacific Partnership (CPTPP) and Regional Comprehensive Economic Partnership (RCEP).

Regarding the Ukraine issue, Prime Minister Chinh said Vietnam attaches great importance to the humanitarian issue and announced that Vietnam will provide $500,000 in aid to Ukraine through international humanitarian organizations. The decision was welcomed by Prime Minister Kishida.

On the question of the East Sea, the two heads of government underlined the importance of ensuring the safety, security and freedom of air and maritime activities, and of settling disputes and disputes through peaceful means, including full respect for diplomatic and legal processes, no use of force and no threat of use of force, based on international law, in particular the 1982 United Nations Convention on the Law of the Sea. also stressed the importance of the full, comprehensive and effective implementation of the Declaration on the Conduct of Eastern Sea Parties (DOC) and the early completion of an effective and substantive Code of Conduct for Eastern Sea Parties (COCs). legally binding and consistent with international law.

Following the talks, the two Prime Ministers witnessed the exchange of 22 cooperation documents between ministries, agencies, localities and enterprises of the two countries.

They jointly chaired a press conference on the main results of their talks.

Prime Minister Kishida is paying an official visit to Hanoi from April 30 to May 1./.