Tokyo (VNA) – Vietnamese Minister of Natural Resources and Environment Tran Hong Ha and Japanese Minister of Environment Tsuyoshi Michael Yamaguchi discussed measures to strengthen cooperation between the two countries in the field of environment and the response to climate change, focusing on the implementation of the commitments made by the Prime Ministers of the two nations at the 26th United Nations Conference of the Parties on Climate Change (COP26).

At the 7th Vietnam-Japan Environmental Policy Dialogue in Tokyo on November 24, Ha expressed his belief that with the great attention of both sides, bilateral cooperation in the fields of environment, climate change response and The development of the circular economy will be further promoted beyond the areas of natural disaster prevention and control and ocean debris management.

Concluding the dialogue, the two ministers signed a cooperation plan on response to climate change towards the objective of carbon neutrality by 2050. The document is important in the implementation of the commitments made by the Prime Ministers of the two countries during COP26. 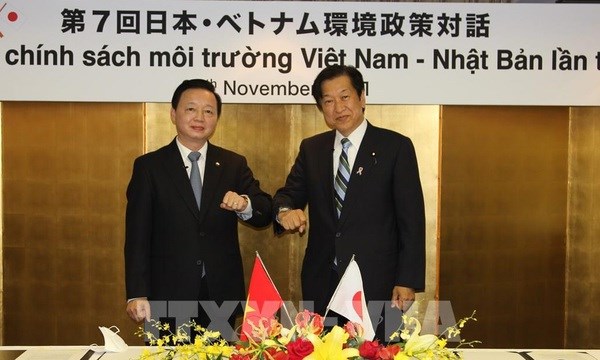 Speaking to Vietnam News Agency after the dialogue, Ha said that during the dialogue, he and his Japanese counterpart focused on content that will contribute to the upcoming agreements between the two governments on a roadmap towards the goal of net zero emissions by 2050. .

He said the Japanese minister stressed comprehensive cooperation with Vietnam from the stage of building and completing policies and institutions as well as technical assistance. It is time for the two countries to switch from fossil fuels to renewable energy, wind power and hydrogen, as well as the application of new and modern technologies, Ha said.

In addition, the two parties also emphasized measures aimed at improving the effectiveness of existing cooperation contents such as the Joint Crediting Mechanism (JCM)./.