In a rush to reduce carbon dioxide (C02) emissions and abandon its negative image of overreliance on fossil fuels, Japan has in recent years promoted solar power. However, the “mega solar farms” that have been installed on mountainsides and in rural communities across the country often cause problems that damage the image of much-needed renewable energy projects.

According to one estimate, there are more than 6,000 mega solar farms in operation throughout Japan. Mega solar farms are installations that produce more than 1,000 kilowatts (1 megawatt) of energy each year, enough to power between 400 and 900 homes.

These mega solar farms have proliferated since the government introduced a feed-in tariff (FIT) program to promote renewable energy investment in 2012. Recent government policy continues to provide an encouraging environment for mega solar in Japan.

In 2020, then Prime Minister Suga Yoshihide pledged to make Japan carbon neutral by 2050. That same year, Koizumi Shinjirō, who was then Minister of the Environment, was so enamored with the mega solar he proposed to revise the laws to allow solar farms to be built in protected areas of the national park.

An example of the scale of these solar installations – and the magnitude of the problems they can create – can be found in Japan’s Okayama prefecture, where one of the largest solar mega-plants includes 900,000 solar panels. on 260 hectares of land, generating 230,000 kilowatts of energy each year.

Many residents who live near these facilities claim that these mega solar farms destroy the environment and bring little benefit to the surrounding communities. Landslides caused by the construction of mega solar farms on steep mountain slopes are particularly worrying. 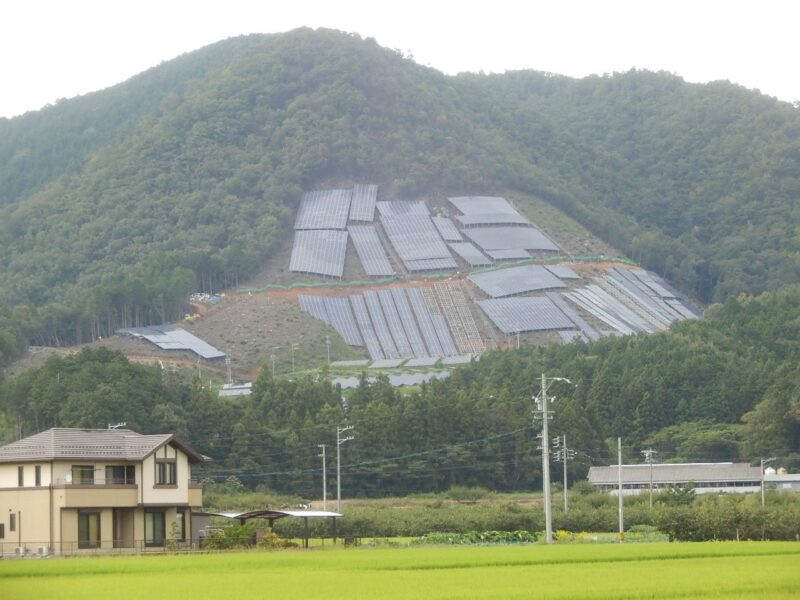 Solar panels dominate a mountainside in Gifu, Gifu Prefecture. Solar farms like this and even bigger mega solar farms have many locals worried about the danger of landslides. Photo by Magari Hiroyuki, 2017. Used with permission.

Opponents also cite the danger of solar panels being blown away during strong typhoons, the potentially damaging electromagnetic fields emitted from solar power generation, as well as the intense glare from solar panels as reasons they are against mega solar. .

Popular opposition seems to be so strong that a 2021 survey by the Mainichi Shimbun found that 80% of Japan’s 47 prefectures have problems with mega solar farms.

Part of the problem is Japan’s FIT system. Under this program, the Japanese government awards long-term contracts to renewable energy producers. However, many companies and investors, who speculate on buying and selling FIT contracts, have simply seen it as an opportunity to make money. The industry is so lucrative that major investors such as Goldman Sachs have set up an exchange to trade Japanese solar projects.

The involvement of large companies and investors meant that most locally funded or smaller-scale solar projects were excluded from the picture: 32% of all FIT contracts went to mega solar farms, and almost 78 % of these farms are financed. with foreign or foreign capital.

In addition, the financing costs of the FIT system are passed on to taxpayers in the form of higher energy bills. As a result, electricity prices in Japan increased by 37% between 2011 and 2014.

Additionally, much of the energy harvested from mega solar farms is not used locally; instead, it is consumed in remote urban areas. As a result, many of these communities are increasingly rejecting solar megaprojects.

Residents of the small town of Heguri in Nara Prefecture recently formed an opposition group and launched a lawsuit to stop a 48-hectare, 50,000-panel mega solar farm that was to be built in their community. They were particularly concerned about landslides, environmental destruction, and the 22,000 volts of electromagnetic waves expected to pass directly beneath their city.

Some have taken to social media to vent their frustration. A Twitter account, Heguri Middle School Students Opposed to the Mega Solar Project, said:

It says in this article [linked in the tweet] that one can receive an electric shock simply by passing within two meters of very high voltage wires. But naughty city officials and builders will bury cables three feet under a route children take to get to school.

Meanwhile, on the site of mountaineering enthusiasts Yamap, a user, Yugo, documented and commented on the destruction and deforestation that had already occurred as a result of construction of the project. 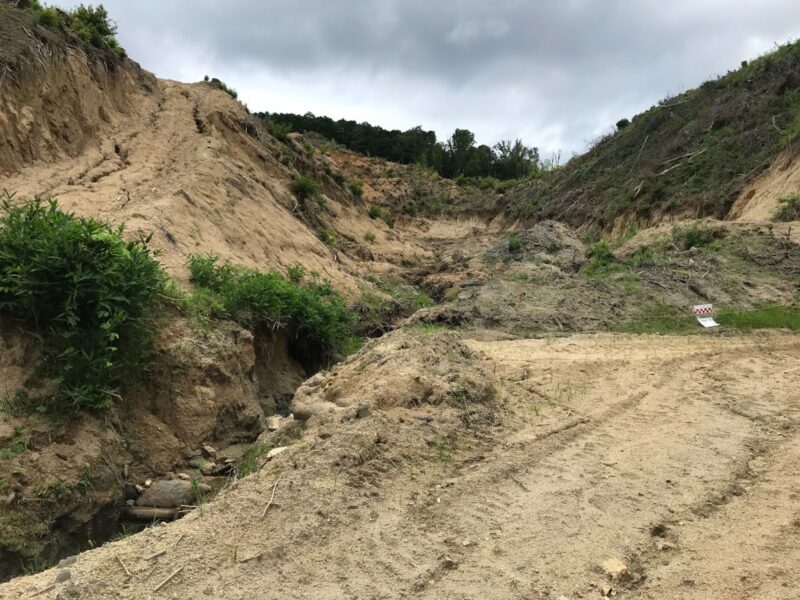 An image of Yamap user Yugo. “This place was probably a valley with rice paddies,” Yugo commented after visiting the area on July 18, 2021. Photo by Yugo. Used with permission

About 1,000 residents demonstrated their opposition in the local district court by collecting more than 9,000 signatures in favor of abandoning the project. In response, the Nara Prefectural Government ordered the project to be halted in June 2021. The local government also encountered issues with the builder’s initial application in 2019 and found that the project failed to meet proper safety regulations.

Now, the fate of the project remains in limbo. No construction has started, but a wide swath of mountain around Heguri remains barren, and locals worry about potential landslides – and what’s next.

Tada Keiichi, a resident of Heguri, said he initially had a positive image of solar power and so-called “clean energy”, but after learning about the details of the project in his community, he changed. of opinion. “Destroying the precious environment and threatening the lives of locals is neither environmentally friendly nor clean,” Tada told the Mainichi Shimbun in September 2021.

Similarly, speaking at the Asahi Shimbun about the problems of mega solar in Japan, Professor Hata Yoshio of Okayama University of Science commented: “If renewable energy, which is supposed to protect the environment, the actually damages, so she puts the cart in front of the horse.

Renewable energy sources are an essential part of the fight against climate change, but Japan’s approach to solar megaprojects is having the opposite effect by damaging public perception of their potential.