At these events, the leaders of the Association of Southeast Asian Nations (ASEAN) and partners reviewed bilateral cooperation in the recent past, defined directions for the development of their relations and discussed regional and international issues of common interest.

Japan, the United States and Canada stressed that they cherish their relations with ASEAN; pledged to continue assisting the bloc in community building and regional integration; supported ASEAN centrality; and pledged to make responsible and constructive contributions to ASEAN’s efforts to effectively address common challenges and promote the construction of an open, inclusive and transparent regional architecture that respects international law.

At the 25th ASEAN – Japan Summit, ASEAN leaders and Japanese Prime Minister Kishida Fumio applauded the progress made in bilateral relations, noting that economic cooperation is a beacon of hope in the region’s recovery and sustainable development efforts.

Prime Minister Kishida stressed that Japan values ​​the nearly five-decade partnership with ASEAN; supports the solidarity and centrality of the association in the regional architecture as well as the Asean Outlook on the Indo-Pacific (AOIP); and pledges to continue its active participation and effective contributions to ASEAN-led mechanisms.

Prime Minister Chinh spoke highly of the significance of ASEAN’s relations with Japan – the bloc’s top partner, noting that their close and fruitful ties have become a model for ASEAN’s cooperation with partners and have greatly contributed to peace, security, stability and prosperous development for each side and the region as a whole.

On the direction of bilateral relations in the coming times, he stressed that economic, trade and investment partnerships should be the basis, impetus and priority in post-pandemic recovery.

The governments of ASEAN countries have created optimal conditions for Japanese companies and investors to stabilize and expand production and business activities, especially in supporting industries and high-tech industry. They also hope Japan will facilitate the export of agricultural products from Vietnam and ASEAN, as well as the diversification of supply chains, he added. 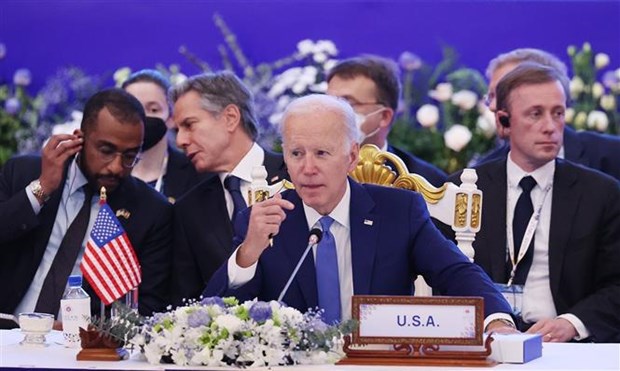 US President Joe Biden at the 10th ASEAN-US Summit on November 12. (Photo: VNA)

At the 10th ASEAN-US Summit, ASEAN leaders and US President Joe Biden spoke highly of the importance of bilateral partnership for peace, security and prosperous development in the region and the world. On this occasion, they adopted a joint declaration on the establishment of the comprehensive strategic partnership between the two parties.

President Biden said that WE attaches importance to its links with ASEAN; supports the bloc’s centrality and ASEAN’s outlook on the Indo-Pacific; wants to work closely with ASEAN to accelerate the implementation of the newly established comprehensive strategic partnership, and is committed to cooperating with the bloc to effectively address common challenges in the region and globally.

He also announced an additional $850 million in aid for the ASEAN region in 2023 to foster practical and effective cooperation between the two sides.

Hailing strong US commitments to ASEAN, Prime Minister Chinh suggested that amid an economic downturn in the region and globally, both sides should prioritize boosting trade and investment. bilateral agreements and accelerating post-pandemic sustainable recovery efforts.

He underscored Vietnam’s consistent view that all the best possible measures will be taken to help American investors and businesses.

Prime Minister Chinh proposed that the United States, with its position, role, prestige, experience and resources, help facilitate ASEAN exports to its market and assist the bloc in economic restructuring and development. development of the digital economy and e-commerce.

The Vietnamese prime minister also spoke highly of the important role and strong commitments of the United States in promoting international solidarity and multilateralism, and in jointly designing global solutions to global problems.

Prime Minister Chinh called on the United States to increase assistance to ASEAN countries, including Vietnam, to improve medical resilience, epidemic response and climate change adaptation while promoting green growth, including the just energy transition. He also urged the United States to continue assisting the bloc with sustainable development in the Mekong subregion through the Mekong-US partnership, including building the resilience of vulnerable communities in Vietnam’s Mekong Delta.

At the summit commemorating 45 years of ASEAN-Canada relations, ASEAN leaders and Canadian Prime Minister Justin Trudeau hailed the encouraging results achieved over four and a half decades of dialogue and cooperation between the two parts.

Prime Minister Trudeau affirmed that Canada is always a trustworthy partner of ASEAN and values ​​relations with the bloc. He noted that ASEAN occupies the central position in Canada’s Indo-Pacific strategy, which will be announced soon, and that Canada wishes to transform its ties with ASEAN into a strategic partnership.

Highlighting the progress made in economic and trade ties, the participating leaders shared the view that much remains to be done to develop bilateral relations and that in the short term, the two sides should strive to help each other. to accelerate the global recovery towards green and sustainable development.

They agreed to continue to coordinate in the fight against the pandemic; improving medical resilience; foster trade and investment relations; and strive to build an ASEAN-Canada Free Trade Agreement (FTA) that brings practical benefits to people and businesses on both sides; strengthen cooperation in the fight against terrorism and transnational crimes; and strengthen partnerships in the areas of education – training and development of high quality human resources, infrastructure development, science – technology, digital transformation, natural disaster management, environmental protection. environment, the response to climate change and the reduction of development gaps.

In his address, Prime Minister Chinh expressed his principled support for the transformation of ASEAN-Canada relations into a strategic partnership.

He said the two sides should intensify consultations, coordinate positions on many important issues and make more responsible contributions to maintaining regional and global peace, security, stability and development. They should also further harness their own potential and advantages to meet urgent needs, recover from the pandemic and develop sustainably.

The Vietnamese leader recommended that priority be given to strengthening economic, trade and investment ties, including the effective implementation of the Comprehensive and Progressive Agreement for Trans-Pacific Partnership (CPTPP) and the resumption of negotiations on the ALE.

He called on Canadian businesses to invest more in ASEAN and help businesses in the bloc engage in global supply chains. He also asked the North American nation to continue creating conditions for goods including agricultural products, aquatic products and fruits from Vietnam and other ASEAN countries to enter its market. .

The Prime Minister also called for closer cooperation in education and training, and for the Canadian government to maintain favorable conditions for people in ASEAN countries, including Vietnam, to live, work and study.

Discussing the international and regional situation at these summits, ASEAN leaders and partners stressed the importance of maintaining and safeguarding peace, security and stability in the region to create conditions for recovery and sustainable development.

The bloc called on partners to support its principled position on the East Sea and efforts to develop an effective and practical code of conduct in the East Sea (COC) in line with international law and the United Nations Convention. 1982 United Nations Law of the Maritime (UNCLOS) to transform the East Sea into a sea of ​​peace, stability, cooperation and sustainable development.

Japan, the United States and Canada have continued to express their support for ASEAN’s role and efforts to promote dialogue, reconciliation and assistance to Myanmar in the search for solutions to stabilize the situation.

Expressing concern over the complex developments on the Korean Peninsula, especially the recent missile tests, ASEAN leaders affirmed their advocacy for efforts to promote peace, stability and full denuclearization on the Peninsula. They underlined the bloc’s desire to build and create favorable conditions for dialogue between the parties concerned within the ASEAN-led mechanisms./.